member of the 5000GENOMI@VDA's scientific committee 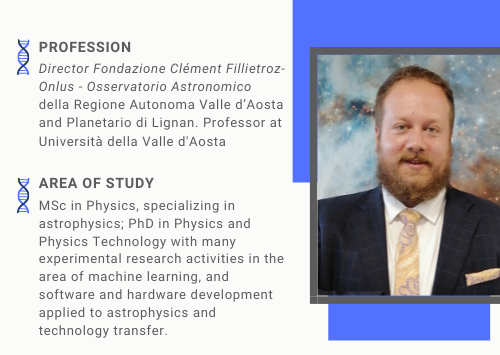 What is your role in the 5000genomi@VdA project? And that of the Osservatorio Astronomico della Regione Autonoma Valle d'Aosta (OAVdA)?

My main role will be that of coordinating and providing programming, data analysis and machine learning skills, with the scientific approach of the Osservatorio Astronomico della Regione Autonoma Valle d'Aosta (OAVdA), for the 5000genomi@VdA project. Personally, I think that the chance to take part in this sort of project is fundamentally important both for individuals and for the entire community. The valuable data obtained from sequencing is a great heritage for improving the health of future generations, and it could be considered as a “donation”.

How and with whom is your research group formed?

My team will comprise experts in IT, physics and machine learning from OAVdA, who will work alongside some of the winners of ESF study scholarships, biotechnology and statistics graduates, taking part in their hands-on training. The team’s distinctive feature is therefore provided by a blend of different technical skills, and above all by its mode of approaching, analysing and solving specific scientific issues, generally referred to as “problem solving”, along with the absence of preconceived scientific ideas. In fact, many of the specialists at the Osservatorio Astronomico generally have a non-biological expertise.

In which phases of research will the OAVdA team intervene within the 5000genomi@VdA project?

It is always important to remember that no groups will be working in "isolation". We will be operating in parallel at all times in order to pursue shared scientific objectives. Our work will generally begin after the analysis of biological samples and the generation of genomic data (led by Prof. Gustincich), followed by an early-stage bioinformatics analysis (Prof. Cavalli’s field). This data, already partially reorganised, will then be subjected to further study by my team who will have the task of interpreting it with the help of tailor-made machine learning and artificial intelligence software, specially programmed to meet our research objectives.

What are the analogies between the world of astronomy and that of genomics?

It may seem strange, but in actual fact there are many similarities between the world of the stars and that of DNA. Of course, these analogies regard the analytical approach and data structure, rather than its content. In fact, in both astronomy and genomics, vast arrays of data are generated, which then have to be correctly managed and processed using a clear and structured method.

What is machine learning in medicine?

Machine learning comprises all the algorithms and processes that allow a machine to rapidly “learn”, starting from data arriving from real situations. These tools have notable potential, which lies in the possibility of processing large amounts of data in a short time, and producing totally objective results based uniquely on the data entered. This sort of approach can be very useful for validation and the elimination of bias in certain diagnostic processes in which there is currently a notable input on the part of the operator. This makes it possible to create a compendium accompanying the diagnosis, improving and simplifying it.

5000genomi@VdA is looking for new scholars!